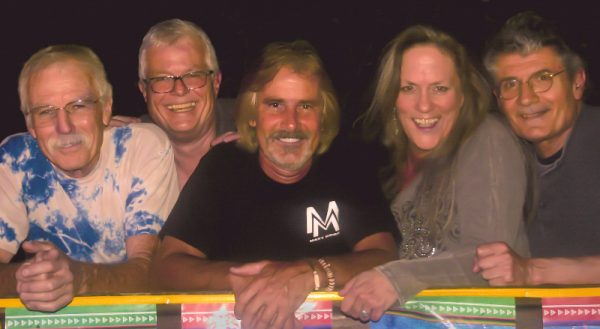 Silverback is a group of five talented musicians from as many different backgrounds.

Up front is Laurie Hofer, a highly respected fixture in the Monterey Bay music scene for many years. She was a member of the elite Blue Notables, an eight voice a capella group of the finest singers in the area. Her creative phrasing, sense of melody and style, and vocal accuracy enable her to make any song “her own”, while remaining respectful to the original.

Guitarist Michael Rosati retired to the Santa Cruz mountains after a career as a studio musician and teacher in Los Angeles. He has recorded and performed with many national artists, as diverse as Donnie and Marie Osmond , Dionne Warwick, James Taylor, Lee Ritenour, Vince Gill, and Patrice Rushen. All styles – no problem.

Bassist Bob Wider is a first-call player for jazz musicians in the area, or traveling through the area. His background is jazz, and he is equally adept at any style put before him. Smooth and always appropriate, his sense of rhythm and melody make for an extremely interesting bottom end.

Drummer Jeff Forehan has played drums and in bands all his life and is currently the Director of, and teaches Commercial Music Production at West Valley College since 2005. In his office he has on display both a Platinum Album (Batman Soundtrack) and a Gold Album (Love Sexy) recognizing his work with Prince on those albums. A fine vocalist, he is a lead singer as well as a contributor to the sweet three-part harmonies that the band employs.

Keyboard player and vocalist Gary Thomas has been singing since emerging from the womb (according to his mother). He has played and sung as a solo artist, as well as having been a member of a number of bands, including a stint working for Micheal Nesmith’s Video Ranch, and is a current and 17-year member of David LaFlammes’ It’s a Beautiful Day.

Silverback is versatile, danceable, and listenable. Check it out